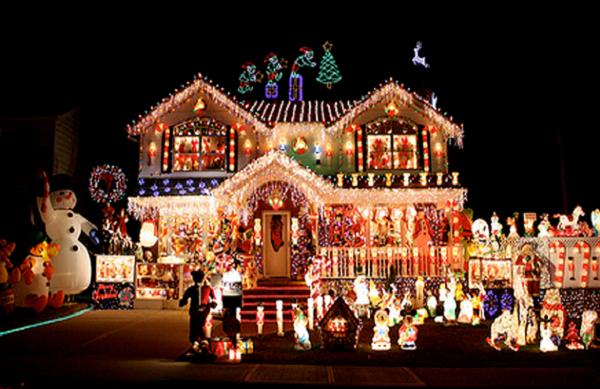 Ahh! The spirit of Christmas is right around the corner. Many of us invoke our inner holiday spirit with a brilliant light display both inside and out. However, nothing brings our winter fun to an abrupt halt like the power suddenly going off in a room, causing the lights, music and other electric- powered accessories to unexpectedly go out. If you suddenly lose power in a single room or area of your house, chances are you overloaded a circuit. Putting too many lights/displays or devices on a single power strip is a common culprit. But you also may be attempting to draw more power than your circuit breaker can handle causing it to trip. Connecting too many strings of lights together can also cause an issue if they all lead to the same outlet. This is of special concern if you live in an older home which wasn’t wired to modern standards. You put your circuits at a greater risk if you are cooking a big meal for a large family gathering at the same time you turn on your holiday lighting displays and they are on the same circuit. Think about all the added power demand for microwaves, mixers, food processors, coffee makers, and dishwashers. This can easily overload wiring.

Cleaning up after your big meal can also cause an overload – vacuum cleaners are notorious for tripping breakers on circuits that are already carrying a decent-sized load. Space heaters are another known electricity hog that often pose problems to circuits during the cold holiday months.

HOW TO AVOID OVERLOADING YOUR CIRCUITS

Avoiding an outage is simple in theory – don’t plug too much stuff into the same circuit. Typically, in a newer constructed homes each room in the house has its own circuit. And heavy-duty items like an electric oven or dryer have their own dedicated lines. But exact layouts can and will vary.

Most circuits are rated for between 15 and 20 amps, so if you do a little homework and find out how much current your lights and appliances draw you can ballpark how much is safe to plug in. If you approach an 80 percent load, find another room to plug in the next light strand.

It’s a good idea to avoid rooms that already have a lot of appliances, like the kitchen, when looking for a spot to plug in your lights. You can also unplug any devices or electronics that you don’t plan to use, to free up more current for those precious decorations.

One way to get a lot more festive with your existing system is to purchase LED lights, which draw much less current than traditional bulbs and will save you money on your electricity bill during the holidays in addition to putting less of a strain on your wiring.

If you are truly committed to having the brightest holiday display on the block, complete with animatronic snowmen and the like, you could even consider installing one or more new, dedicated circuits rated for 20 amps.

How To Fix An Overloaded Circuit

In the event you do trip a breaker, you should feel grateful that it was on guard to protect you. If the breaker wasn’t there when the current got to be too much, the wiring in the circuit could quickly heat up, melt the insulation and potentially start a fire.

When the light suddenly does go out in a room, the first thing to do is unplug any appliances or devices on the affected circuit. If you don’t know which outlets correspond exactly to which circuit, now is a good time to figure it out – just look for the stuff that stopped working!

Next, open your circuit box and find the tripped breaker. The switches typically have an on/ off label, but if not, just look for the breaker flipped in the opposite direction of all the others. To restore power to the circuit, first switch the breaker all the way off – when it trips, it only flips partway, and can’t restore power until you turn it off completely – then switch it back to the on position. Once you get the electricity up and running again, take your lesson about overloading the circuit to heart and don’t try to run as many things at once next time.

A final word of caution: It’s possible that your breaker may not trip right away on a lightly overloaded circuit, especially if you live in an older house. Keep an eye out for buzzing, sparks, or warmth coming from a heavily-used outlet, or persistent dimming of lights. If you spot any of those signs, stop using that outlet immediately until you can get an electrician to take a look and remedy any hazardous conditions. Remember, no holiday display is worth risking your home or family to a fire.